Alla Soroka writes about a Quaker peace initiative in Ukraine

[This article appeared in the 24 September 2015 edition of the British magazine The Friend, www.thefriend.org.  It is reproduced here with permission.]

The ‘White Sail’ summer peace camp, which was made possible by generous funding by British Friends and Meetings, ran from 15 to 26 July 2015 in the ‘Blessed Summer Recreation Centre’, which is forty kilometres from Odessa. There were eight families participating, including eleven parents, eleven children above the age of fifteen years and seven children of ten to fifteen years of age. They were all displaced people from the Lugansk and Donetsk regions as well as the Crimea, who were recommended by charities and the social services.

We hoped to create a safe space for people who had been displaced by military action in which they could feel at ease, rejuvenate themselves, relax and strengthen their family relationships. We did not want to offer a ready-made programme but something more flexible where families could plan the week according to their wishes and share responsibility.

We invited facilitators from the Alternatives to Violence Project (AVP) who had creative skills: painting, beading, découpage, and so on. This helped to create a special, creative atmosphere. As it turned out, many of the parents had experienced some group therapy, which made them feel like ‘patients under treatment’. Our art workshops, however, created an atmosphere of freedom and comfort. The opportunity to make something beautiful puts people in a good mood. We conversed a lot during these workshops, and people shared their stories. Then we added the AVP training, not calling it ‘training’ but rather ‘team and family games’. The participants were happy to come to such sessions.

My impressions were only the brightest, good, good. At the family camp ‘White Sail’ I found many new and wonderful people. I can say that these ten days were the best days of this summer. I learned many new things, tried a lot of new master classes. Of course, I want to wish you all happiness, smiles, lots of love, good health and the brightest memories.
Tanya (fifteen years)

The team of organisers, in addition to the AVP team, consisted of a sports instructor, an art therapist and a physician. Every evening we reviewed the day and made a programme of activities for the next day. We balanced our schedule so that the families could relax on the beach in the morning and evening, as this is the safest time for sunbathing. Creative workshops were at lunch time. The best time for training and family work, when people were most likely to be active, was before and after dinner, when it was cooler.

With just eight families, we could give everyone good personal attention. They were pleased when they were asked to help with the programme themselves. During family evenings the children and parents offered short performances, games and competitions for the rest of us. We sang, drew and organised other activities such as hairstyle competitions. Many people contributed to the overall atmosphere. One of the mothers turned out to be a childcare worker and she arranged a pirate competition for families on the beach. It was fun!

We decided to focus on working with the children and their family interactions. Their parents, watching the changes in their children, developed trust in us. They did not want to paint but the kids loved it and they went along with them. Initially, only children and mothers came to the workshops, but they were later joined by the fathers.

When we were driving here, we thought we’d eat in some village and did not want to go. And when we came here, the first impression was not very good, but in time I realized that I had come to ‘paradise’. During this time I have learned so many things to do, and the entire vacation was very adhesive [literal translation]. Thank you for the holidays.
Sasha (sixteen years)

Most families, in the beginning, complained about our programme and resisted it. They just wished to relax and did not understand why they were all brought together. They did not really want to know each other, preferring to be alone in their rooms and to relax on the beach.

So, The hardest part for us was the first training session. This session was designed so that the parents could introduce themselves to each other. Some of them held back in anger, and we could not understand why. Later, when people started to trust us, they shared the negative experiences they had had when they had been members of other ‘therapeutic groups’.

Some of these families had survived bombing and returned to their homes, but due to the general instability were forced to leave again. It is important to listen to people describing such experiences without advising, only listening. We talked about them in individual conversations, and sometimes at the workshops, to reconnect with the traumatic events of the past.

This group work had to be done very carefully. As the participants began to talk about their negative experiences, we gradually found ways to bring the subject round to what is happening here and now. 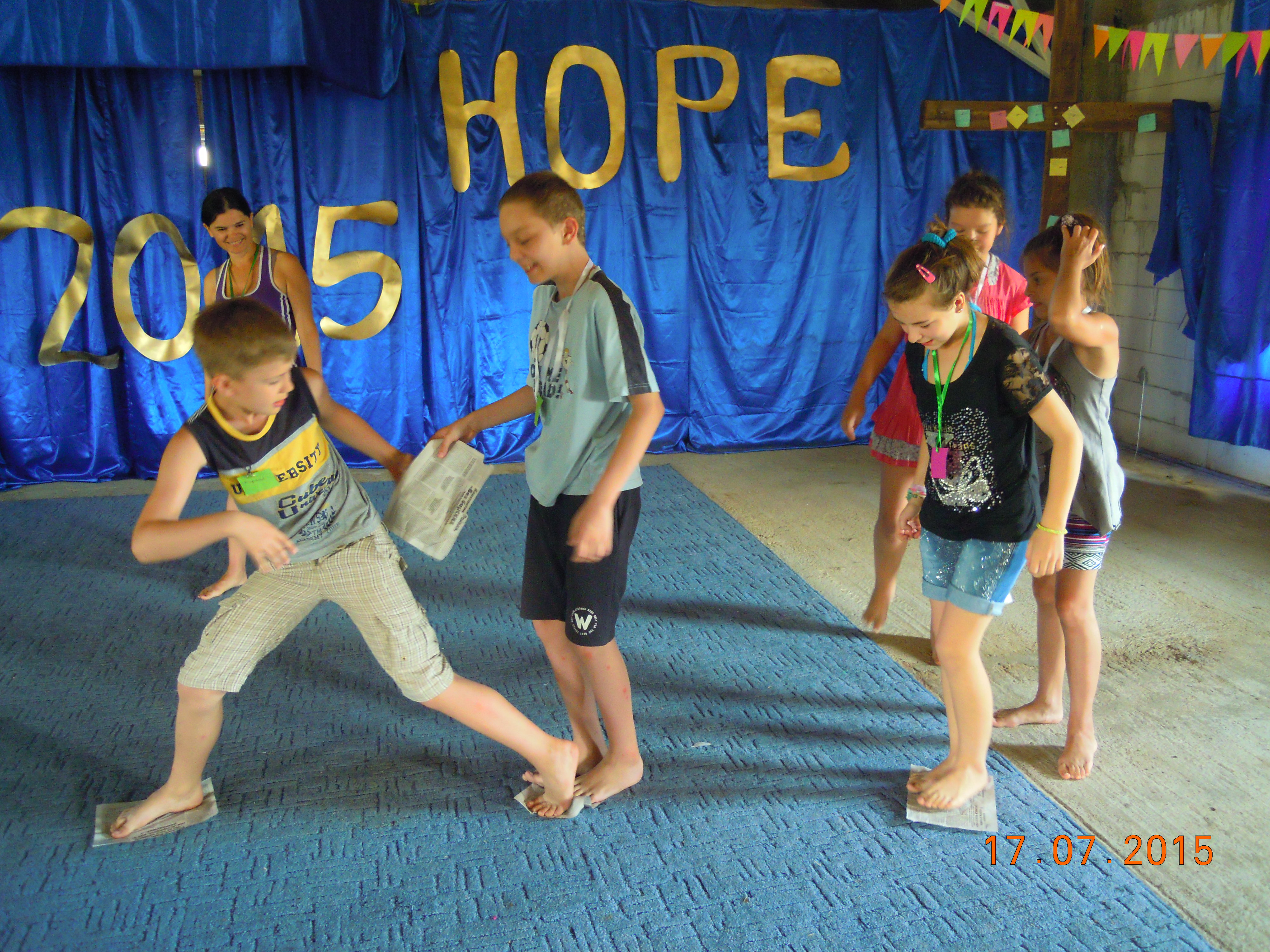 We had one family with a father who had fought in the conflict. He was irritable and inhibited, and only wanted to be with his wife and son. He spoke little, which bothered the people around him. We patiently talked with him about his reluctance to engage with the group. He could choose to come or not to come to our classes. He chose to come but simply watched the scene. Gradually, he became interested, and began to participate in the workshops.

The first few days, when we went into the sea, I was crying from happiness – very cool to feel human again. In this camp we met good people – a lot!!! – who cared about us, supported us, comforted us.

We are very grateful to those whose faces we have seen, and are especially grateful to those whom we have not seen, but thanks to their sacrifice, we spent ten fabulous days. Yes, the Lord will reward you handsomely. The last year of the war in 2014 brought a lot of sorrows and experiences, and here we rested physically and spiritually. Our whole family, Vladimir, Maria, Misha, Roma, and grandson Vadim, will remember these wonderful ten days of our lives. Sister Alla will receive a special reward in heaven, we believe it.

We did not touch on the theme of ‘Ukrainian’ versus ‘Russian’. Our team were dedicated people trying to strengthen these families, and we did not have conflicts ourselves on the subject of nationality. The creative atmosphere of the workshops proved healing. Participants can create beautiful things, happy as children when they get a result. Our work at first felt like a tug trying to bring a big ship out of harbour. During the first four days the people became interested themselves and began to trust us and each other.

We asked the families to come up with the name of our camp, and they called it ‘White Sail’. The children made up a song about it. At the end people did not want to leave; they asked me to thank those people who gave money for the camp, and they hoped to meet again next year. We have the desire and the energy to do this work next summer. We would like to invite those people again and to see them once more.

Alla is an AVP facilitator. She is a psychologist by profession, teaching at The Christian Open University of Economics and Humanitarian Sciences in Odessa.